Last night I went to the most fabulous show in a tiny wee cultural centre called Makan (which literally means 'the place'). The room is set up with mic's and sound desk etc, but apart form that it looks like it looks like someone has spread out chairs in a half build/demolished house. Very rustic (and the ceiling fans don't do much to keep the heat at bay). However- surroundings only go to intensify the experience when the Zar actually starts…………

First of all there is a man, in a smartly pressed white galabeya singing religious songs accompanied by the Nay (flute) – he has amazing presence and dignity- as my friend described it- a voice you could listen to forever! Next the main event- the lead singer in the largely female group is Umm Sameh- a woman in her 60's and you have never seen such fabulously sexy facial expressions and totally attitude- a face you could watch for hours even if it hadn't been backed up by the most amazing husky and skilled voice. She was a character to behold and impressive the way she orchestrated the entire thing- giving hand gestures to the sound guy and all the musicians throughout- making sure everything goes just how it should. A real professional performer. She had us all enraptured!
The break was very informal- everyone piled out onto the street for a cup of tea or a cigarette- the musicians too- chatting with everyone. It reminded me of my Afridonia days!

The second act started very differently- with an old guy- who really looked like he'd just been sitting in the sheesha café 2 minutes before and wasn't sure how he'd managed to end up when he was- standing in his galabeya with a huge belt around his rear end which was covered with lots of tiny iron bells and goat hooves (called a 'mangour') and when he started to shake his stuff he could make fantastic music with that alone! He made it look no more difficult or surprising that walking down the street. Riveting! I must also mention the cygat lady here- she sang and danced which such gusto and enjoyment that she almost looked out of control at times- but she never was…. First person I have seen play cygat (finger cymbals!) who has actually inspired me to learn them!

There was also an instrument- played beautifully which was totally new to me, yet strangely familiar. It had a huge circle at one point and 2 sticks coming from it, with a pole at the top forming it into a triangle with strings strewn across it- seemingly called a tamboura (a 6-string lyre). It was familiar because I have a papyrus image with an ancient Egyptian woman playing the exact same thing- it didn’t look like it had changed in all these years. Amazing- the history of music!

Long before the end of the show people were up dancing along to the beat- more African sounding Arabic.

More about the history and ritual of the Zar (rather than just my experience of this one!) in the next blog…………. 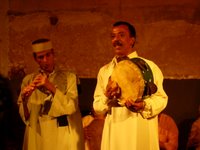 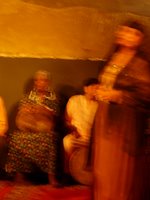 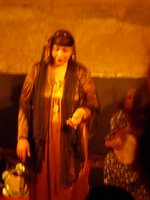