What a lot of people don't know is that Egypt has a very high rate of recycling. In the centre of Cairo, at the foot of Mokattam, live the garbage collectors of this enormous metropolis. Referred to as "zabbaleen", these people (approx 20 000 of them) survive on rubbish and have become "a cast" of their own, often excluded from the rest of society. 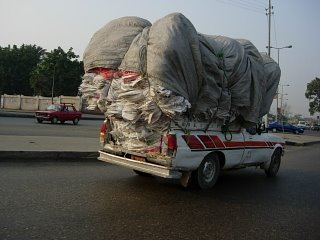 It is estimated that about 30 per cent of Cairo's garbage is not collected formally and that the zabbaleen, the informal sector, currently handle one-third of the garbage of 14 million people at no cost to the city authorities. Specifically this means that the zabbaleen collect up to 3,000 tons of garbage every day and up to 85 per cent of that waste is recycled by them directly.

Whole families live in houses piled high in every room with rubbish collected from around the city. Food scraps are either eaten directly or fed to goats and pigs. Walking through this area, esp. on a hot summers day, you can tell by the smell how bad this has to be for people's health. 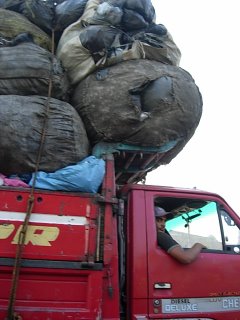 The facts and figures here have been taken from the unesco website, which also has some info re how you can help them improve the living conditions of some of the people struggling against the odds..... http://www.unesco.org/webworld/netaid/env/egypt.html
Posted by Lorna (aka BellyLorna!) at 3:44 pm