The transport around Cairo I'm sure leaves a lot to be desired.... but it does seem to cope remarkably well with the vast numbers of people needing to move around. The Traffic moves in such a way that many more cars can drive down one street at the same time as would be possible in Uk. Roads rarely are at a complete standstill. Mainly because there are no set rules about road lanes or waiting to let people out.... you all just go..........oh and toot your horn if you think someone who hasn't seen you needs to know you are there. (lots of horn blowing goes on!)

The metro here is great. Very clean, and efficient, and cheap. The first 2 carriages in each train are reserved for women only so you don't have to be pressed up against sweaty men..... Which is not a nice experience here as a woman!!! In the women's carriages you often get chatting and laughing with people there, or at least with their kids! There are currently 2 lines which cross at Sadat (underneath Tahrir Sq, beside the Egyptian Museum) and at Mubarak (underneath Midan Ramsis- one of the main reason the great statue had to be moved was the vibrations from here!) and you can almost get to the pyramids on them. It's definitely the cheapest (50pt = less than 5p) and easiest way to get to the area Mar Girgis where all the old Coptic churches are (another of the places the Virgin Mary is said to have stopped at in her journey). The nearest stop to me is at the Cairo Opera House.... which is about a 15min walk away. I should use it more really.

Here's a rather lovely photo my friend Nick took at the Mar Girgis stop. While he was here he became taken with the numbers....... and could translate all the car number plates by the time he left faster than I can!!! Although arabic script runs from right to left, the numbers are written and pronounced left to right, ish..... so 354 becomes 3 hundred and four and fifty. Very confusing!!! 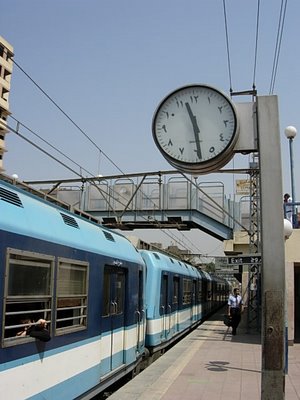 Fantastic blog Lorna! Great to visit regularly and see what you've been up to and what is going on in Cairo.

Looking forward to your next instalment!

This blog brings alive so many memories of my short time in Cairo.... And this bit sounds so painfully familiar! After being completely ripped off buying spices at "local" prices ("if you think something is a good deal in Egypt, you are being ripped off" - heard that one too late!), I was determined to learn arabic numbers (kindly provided by the lonely planet book) and the best way to practice was indeed to read the car number plates! For the whole hour on the bus from pyramids back to central Cairo I was trying to read them out my bored hubbie :) It paid off that same night when we went to stock up on egyptian sweeties and the seller was trying to make out they were 25 e. pounds whereas the price tag said 6! He was VERY impressed (or rather disappointed) when I pointed out his slight discrepancy.

hehe... glad the blog is bringing back good memories olesya!

and well done you for reading the signs!!!!