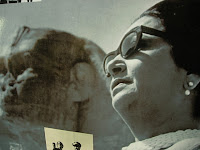 I went yesterday with 2 friends Abeer and Bianca, to the Om Kalthoum Museum in Monira (an island in the Nile in centre of Cairo) the cost was only 2le for residents (not sure what for tourists). The Museum is also called 'Kawkab al-Sharq (Star of the East) Museum' and was opened by the government in 2001 in the grounds of the Manesterly Palace.

It is also where the Nilometer is situated (in days of old this metering of the Nile would directly represent how rich the people were , since the Nile being high meant the fields were more fertile and therefore the nations income was higher! To see this you have to pay an extra ticket and since he wasn't prepared to give us residents rates for that we decided not to bother on this trip (I'll definitely be going back anyway- so next time!)

Om Kalthoum was a singer who lived 1904-1975. (she was also a songwriter and actress) Her father dressed her as a boy so she could perform in a troup in her village… he also taught her to recite the Quran.

She became famous in Cairo, not just because of her amazing voice and huge orchestrated pieces (sometimes a single song would last over 1 hour and a typical concert of 3-6hrs would only have 2-3songs in it!) but because she found support from the leaders of the day, Nasser and later Sadat, who appreciated the way she would rally the nation together. Every Thursday night the streets of Cairo would become deserted (hard to imagine nowadays!!) as everyone got themselves next to a radio to hear her weekly performance live. This program was so popular with the nation that Nasser put his own political broadcasts on directly afterwards since he knew everyone in the country would be gathered round the radio at that time! She was a fantastic ambassador for Egypt and traveled widely singing in many nations and receiving awards and medals for achievement from many including Morocco, Tunisia, France and Pakistan. Her death was attended by an amazing 4 million mourners, who actually grabbed the coffin and took it to a mosques deemed to have been her favourite before allowing it to be taken back to be buried. An incomparable funeral seems appropriate for such an 'incomparable voice' 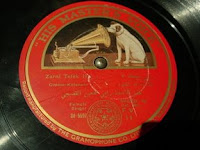 The museum has a few of the actual dresses she sang in, and also a pair of diamond encrusted glasses she wore. 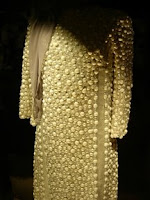 You can also find wonderful collages of photos of her taken throughout her lifetime and the awards from various nations. What I was impressed by was that they also had a few of the original songs, for example- the song 'Enta Omri' written out on paper from Mohammed Abdul Wahab's Office. He was a famous and fantastic composer and musician in his own right and wrote many of the songs for 'The Lady' 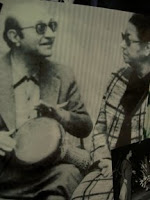 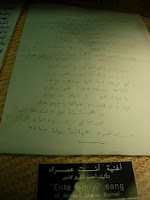 There was also an area where you could watch a film about her life…. Although we didn't sit and do this since it was too nice a day outside!!! Also I believe that if we had got there earlier in the day (we did go fairly late on) that we would have seen a panorama (not sure of what!) with her music playing throughout. What the museum unfortunately lacks is any handouts or notice boards with information- so if you don't know her story in advance- the venue itself doesn't teach you much. For those who have heard of her- or appreciated dancing to her music… then it is worth the visit!
Posted by Lorna (aka BellyLorna!) at 5:27 pm

Email ThisBlogThis!Share to TwitterShare to FacebookShare to Pinterest
Labels: All about Bellydance, Photos- Cairo, Tourisim musts