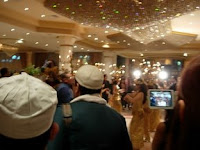 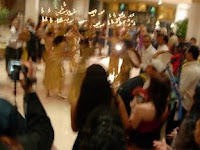 Well- this week is the Nile Group Festival week at the Movenpick hotel, Haram. Still full of the flu I went along to the opening night on monday night. At the start if the evening, they had a saadi band playing in the entrance hall of the hotel, with tannouras (whirling dervishes) and then 8 girls with shamadan (candelabra) on their heads! The processions made its way- for about an hour in total into the main hall and then we waited for the shows to begin. 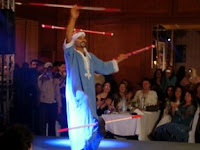 Tito was first, with his group. He performs in hotels in Sharm, so he has a group of 4 girls and 4 boys who are backing dancers for him... but they also do various routines including pharonic style ones...... Tito himself performed his amazing stick dance- with 4 sticks!!!! Swinging them round and stopping them just inces away from Mahmoud Reda's face (he was sitting in the audience with Farida Fahmy, Aida Nour, Feres, Nour, Leil 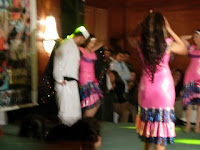 a, Khaled Mahmoud........... all the other dancers and teachers for the festival in fact!) So- amazing stick dance. Then a bit of floating about......... very nice.... then he came out with a sheesha balanced on his head- smoking it and dancing- fifi abdul style!! VERY good- the crowd went wild and he stood on the table where all the 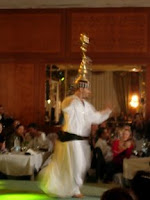 teachers were and that was fun.... lots of attitude and power.... and very strange to see a man squatting down and wiggling his rear end in another mans face............... what can I say!!! He did his famous drum solo- where he dances on a tabla and walks balanced on it across the stage- impressive esp on a carpeted stage! All in all a good show.... although I was a bit disappointed cos so many of the dances, esp his groups dances, were exactly the same as at the Nile Group festival in June this year.

After the Buffet (very 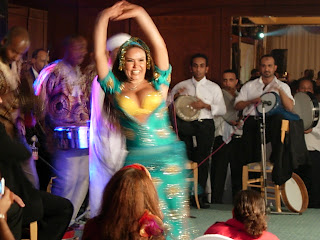 good food!!!!) we waited for ages , it felt like....... and at midnight Lucy performed. She performed in all for about an hour and a half. well- to be honest I felt she was in the changing room the majority of the time.......... but excuse me being critical- she did have lots of costume changes........ and if I can get the photos onto the blog later today I will! She did an omm khaltoum number which was well received... and a nubian number with a line up of bongo drums etc in front of h 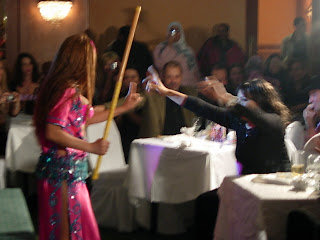 er already massive orchestra... a little khaleegy... and finished with the thing I think she is best at- dancing through the audience with a stick to saadi- getting onto tables/chairs- dancing with the audience....... very nicely done. I spoke to people who hadnt seen her dance before and they were impressed- I have seen her a few times before- and I find she either blows me away... or I get bored. In my mind this was not one of her best performances.....
Then ( at 1,30am) there was a singer........... and I am ashamed to say I don't know his name, but I'll try to find out- Ahmed someone- shaabi- very good.... lots of attitude and fun and really danceable music- he got lots of the dancers from the audience up onto stage with him... that was fun to watch.

The the announcement- the final dancer of the night was supposed to be Nour (Russian dancer- very good, married to Yasser- a syrian singer)- but she is 3 months pregnant! Much congratulations to them.

So instead of Nour it was to be Hanadi. I have seem Hanadi perform numerous times and it was already 2.30 am by this point, and I was still feeling ill, so I have to admit- I left and can't tell you what she was like!!!

So that was opening night!!!! The Nile Group Festival is really nice because it is much smaller than Ahlan we sahlan, and also much cheaper to attend the shows and the workshops......... ( I paid $200 for 5 , 3 hr workshops and that includes the opening and closing night shows which have a buffet- you can also attend at least 2 party nights for free in that price too!) however I have to say - the shows at Mena house are generally better value for money, with more dancers in one evening- and I felt this was the case this year here.

More to follow later about workshops attended!
Posted by Lorna (aka BellyLorna!) at 1:04 pm