It is just so difficult for my body to come to terms with dancing at 10am…… totally unnatural!!! That’s when Aida's workshop was on Sunday. I was really looking forward to it- 3hrs of her fun style of teaching with melaya. She is a strange dancer to describe. When she floats- she really does… but when she does earthy it is more funky than grounded. Often she puts in moves that I know she can get away with in her dance- e.g. pelvic thrusts with knees bent and legs wide…. But I know if I was to put it into a dance people would say it looked vulgar, whereas she just looks like she I having fun! Maybe that one of the benefits of age! Anyway- she started us off (after a beautiful floaty warm up with stretching balletic arms) into the melaya routine… which wasn't obvious- but definite achievable. I felt I was enjoying and getting it….. but then she watched us all (about 60 in the room) doing it and she told the guy on the music- 'mish mumkin' and 'wahish' – i.e. not possible and bad!!!! So she changed the routine. I was really disappointed cos I had really liked what we were doing and the music, but I guess there was probably only about 10 of us in the class who actually got it- so she changed the level of the workshop to suit the majority of the class- which is exactly what you should do I guess as a teacher- but I felt like she had slapped us all!! Ok- so it wasn't meant personally- but I took it that way and went into a bad mood for the rest of the workshop! Esp. since she did a routine which I had done with her both in the June festival and last year in a private class. GRRR. She did one melaya routine, then quickly danced though a couple of times 2 other dances- including one haggela one- with had a lot of head slapping- don’t ask, and lots of circles with shimmys. 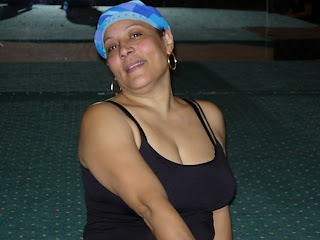 Everyone I spoke to enjoyed it………….. so it was Just me….. For lots of reasons- too tired, and disappointed we as a class weren't deemed worthy of her new routine, and frustrated at doing something I'd done before. Maybe understanding Arabic is going to lead to more frustrations than if I didn't?!!! If I hadn't understood her judgment of us all then maybe I could have believed that she had just forgotten which routine she was supposed to be doing or something. Ah well- glad I went……… I enjoyed the first half hour of it at least!
Posted by Lorna (aka BellyLorna!) at 6:32 pm