Yesterday I did something i had never wanted to in Cairo. I went to the Zoo. My parents wanted to see it, and I had never been before because I had heard that the animals weren't treated very well... but after reading in the guide book that they were keep in humane conditions I relanted and went.

These guys had it good with a large enclousure, although no area of privacy, or escape from the sun at all.... 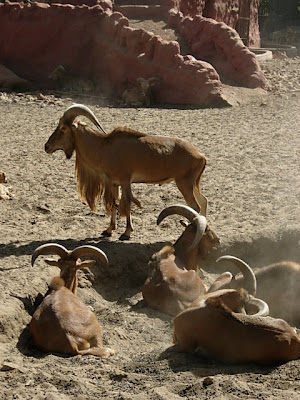 I am not a huge animal lover........ but I was moved to tears twice during the visit. One indian elephant was chained, in the sun, by one front leg and the opposite back leg. it was swaying back and fro and obviously in distress the whole time. the guards were taking money off people to let them go right up to the animals and have their photo taken with them. It was criminal. I was too upset by this to even think to take a photo..

The Lion house though was the pits. 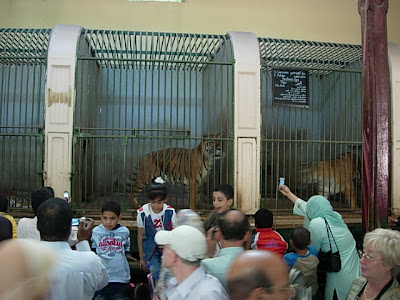 It looked like a prison- with cell after cell with various big cats in them- all in a space where the animal could turn round- but thats about it. 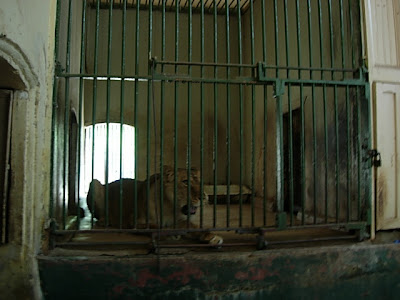 There was a door to an outside area, which was about double the size of the cage- but the bars were down so the 'kings of the jungle' had no choice but be subjected to the high pitched screams of the children and have things thrown at them and of course you could have your photograph taken right up beside the bars for a little backsheesh....... It was horrific. 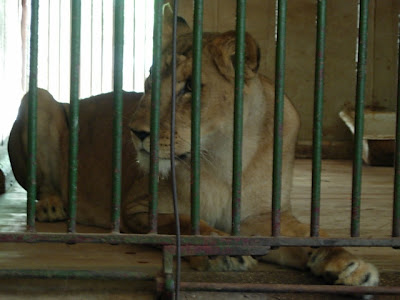 As for health and safety- 'they' would shut it down...... a few of the animals had nice enclosures- but not many. Their hippos looked happy enough- but the speed at which they rush out the water to eat hay given to them by guides who are feeding them only to coax them out the water for photos and therefore tips... made me wonder how much they are fed the rest of the time. 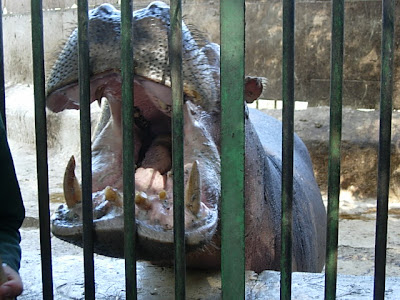 It is amazingly packed. Lots of Egyptians take their children there... as it is a very cheap entry price.... but I wish they would increase the entrance fee and put the extra money into getting the zoo into a respectable state!

However, here's some other peoples views and info re the zoo.... http://www.egy.com/landmarks/97-06-12.shtml and http://egypt2005.mindsay.com/egyptian_thanksgiving_a_zoo.mws (I related well to this girls stories of harrasment by kids in the zoo- my bum was pinched while standing beside both parent and despie being respectivly dressed. I felt that at points the animals were the lucky ones cos they had bars to protect them!!! By the end of the day if I had heard 'hello, whas your name' once more I thought I would scream! even my parents who up to that point had been overwhelmed at how lovely all the kids were, had had enough and were wishing they would 'go away'!!!!)

Would I go back- Never. Would I recommened it- Never. Under my heading i have put this as a tourism must- but actually in my mind it is a tourism must not!