The longest journey ever between Cairo and Alexandria! -Cruise part 4

So, to recap the cruise story so far.
I flew to Rhodes, via Athens. I joined the ship MS Noordam... and then we promptly sailed directly back to Egypt.

When we did arrive at Alexandria one of the first things for me was the relief that my internet worked again.  Sad, but true. The day at sea was too far away from anywhere to pick up 3G, so I had been a day without internet. No facebook, no connecting with friends, no IMessage. If I had been ready for it, I suspect I would have dealt with it better, but I hadn’t thought about not being able to use my phone on ship at least and felt trapped. It is amazing isn’t it, how in the few years that wide use of the internet has developed our dependency on it has increased so dramatically. You can buy internet cards on the ship, but they are very expensive and the connection very slow. I have to admit- I did panic and buy a card. I think it would be healthy for me to try to go for longer periods of time offline. So as soon as I publish this blog and update my facebook, and check twitter for latest Egypt news, then that’s what I will do... for an hour or so at least!

I digress. So, the ship is in Alex. I plan to meet a friend who is from there for lunch. I walked from the ship to the corniche, though some of the most rubbish strewn streets I have seen for a while which really saddened me. When I walked from the ship to shore I met guests from the ship coming back saying to me- ‘don’t do it... it’s filthy, don’t go there! I laughed, thinking they were just comparing ‘normal Egypt with their spotless clean ship’. No. They were right. 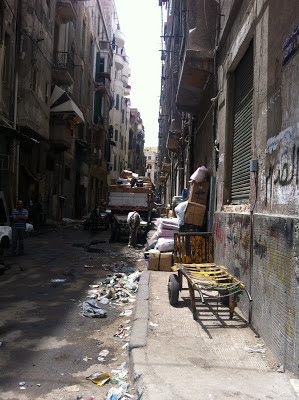 I know things are tough financially, politically, every which way really, but please- have some pride in your country, even just your little bit of it. Imagine how all these two thousand tourists, getting off their 5 star ship and stepping directly into that view you and your country. And their opinion should count, if you want Egypt to do well the tourist rates need to increase. Unfortunately, our two days docked at Alex made almost everyone on board totally confused as to why I would choose to live in a dump like Egypt. Their words, not mine. I found myself having to defend my chosen home over and over again, although with a lot of it, I unfortunately did agree with them. How much respect would it need to put your rubbish in your pocket until you get home instead of throwing in the street? To smile and welcome people to the country without the hard sell that actually most found aggressive and frightening (and didn’t result in sales?)? Come on Egyptians, I know you can do better than this. Please.

Actually, while I am on my rant, humour me please readers. On my way to the corniche the call to prayer was sounding. It was Friday. One man tried to walk up close to me, making sexual comments. I shouted at him, ‘shame on you, cant you hear the sound from the mosque?’ he looked mortified that I had pulled him up on what he was doing and apologised and ran away. Egypt needs more reminders about the respect involved in following Islam. For yourself and for women. It shouldn’t need the infidel bellydancer to remind a Muslim man that he should be paying attending to the prayer, not to my backside. And while I am on the subject. On the way back to the ship after drinking my fresh juice (lunch got cancelled so had a wander about Alex instead- which totally closes on a Friday- good to know if you ever want to do tourist stuff there- Not on a Friday!!) a man tried to do the usual, ‘hello... whats you name? Where you from?’. I answered him in Arabic asking him to leave me alone, he replied... ‘Ah you are Arab...are you from Syria? Do you think the way you are dressed is appropriate for an Arab?’ It is the first time someone has openly tried to control what I wear in this way, and if my Arabic had been better I would have told him exactly what I thought of him and his attitude. As it was I ignored him and kept walking and felt sorry, yet again for what Egypt is becoming. Alexandria, the ‘European city of the middle east’, yeah right. The next day I saw a much nicer side to the city and I'll show that to you in the next blog entry! It wasn't all disappointing!

I need to balance all the above with a positive, in case people reading this think I am just using it all as an excuse to bash Egypt. I love this country and I see it’s potential. I do see the positives too. The lovely place I had my juice at laid out a tray of juice and a box of oranges and were handing them out to people as they came out of the mosques and to the beggars in the street. The caring and sharing that Islam does preach in action. It was good to see. 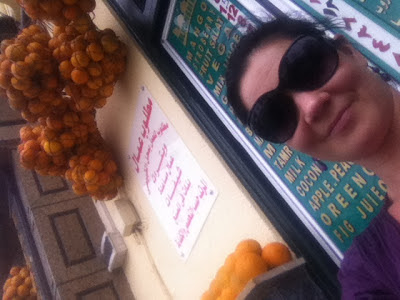 OK. So, the surprise I was writing about my blog last time; usually when a ship is in port they contact the port agent who gets them a ‘local band’ to come and entertain them. I got very excited when Margo (Entertainment manager) said this... does this mean I get to dance with them? With a live band? She said yes. Then I told her it was a shame I hadn’t known about this, I could have brought my band up from Cairo. She asked me to quote a price. My band came back with a price, that to be honest I felt was way too expensive, and I told her just to get the Alex band. She however told me the port agent was asking for double what I had quoted! I couldn’t believe it. The amount of money that man must have been pocketing for himself was mammoth! She asked me to bring my band. Yippee. I was getting to dance in this huge theatre, with my own band. I was so excited!

The band arrived late. The port agent created problems because he was so angry at them and me since he lost out on the deal. He told security that they shouldn’t get into the port etc. It took about two hours to clear up. To see their faces when they saw the ship I was working on was worth every second. It didn’t harm that Margo is stunningly beautiful and they all though that a real life Barbie was greeting them! 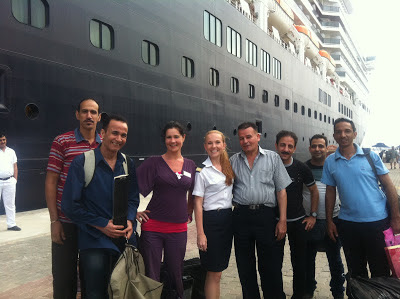 Most of the band haven’t been abroad at all. So, to come aboard and find this other world, full of different peoples and luxury and way of talking with each other, It blew their minds a bit! They all commented when Margo bent to pick up some nails that had dropped on the floor in the pools area, amazed that a manager would do that, not just stand and shout loudly for someone else to do it. They wanted her to come and take over the Pharaohs. I have to agree with them! Said, the tannoura when he was checking the stage before our show said,’ I can’t believe we are still in Egypt. I feel like I am abroad’. I felt proud I had been able to bring them this experience. 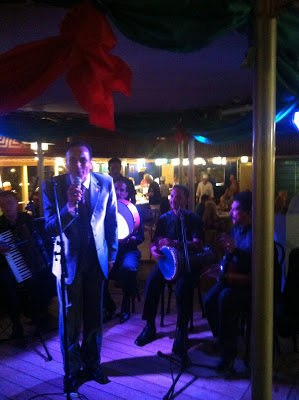 They played in the gazebo by the pool on top deck while everyone was eating their BBQ. It went well. I of course had been busy organising security clearance etc etc and was needed to translate everything for them, so hadn’t even gotten changed yet. I left them to what I knew they did best, and ran for my 20 minute shower, hair make up costume! It was all very stressful getting them from that stage, via a super fast food and cigarette break down to the main theatre on time. Herding cats might have been easier. We made it 2 minutes before curtain! I of course still hadn’t finished make up or gotten into costume so I told them to play a song before my entrance. It worked well.

The show went really well. I danced. The tannoura span, I took the mic and got everyone doing some audience participation from their seats. I love dancing, I love teaching and I love entertaining. This show combined all three and I felt totally at home. I just wish we had had longer. The hour was possibly the fastest in my life!

Everyone loved it, and Margo told me it was the best local entertainment they had ever had on any ship she had been on. What a relief! We went up to deck again for a cup of tea and relax before getting the band onto their bus and sending them back to Cairo. Oh and the photos.. Everyone was desperate to get a picture beside the beautiful Margo. It was very funny to watch! 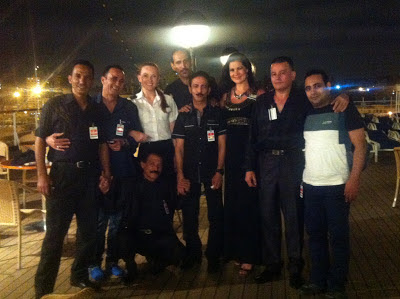 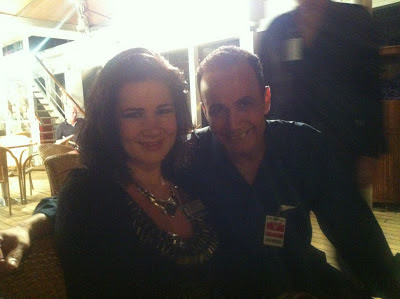 And, the good news, the whole show was filmed... so watch this space until I manage to work out how to edit and upload it!!

What a day! I was totally drained, but happy, when I collapsed into bed!
Posted by Lorna (aka BellyLorna!) at 4:17 pm

Email ThisBlogThis!Share to TwitterShare to FacebookShare to Pinterest
Labels: About Me, All about Bellydance, Egyptian Culture and Customs

Your cruise sounds good fun and so glad you were able to give your band an insight into how the other half lives.
Love from Lila