It wasn't easy to get to St Catherines from Dahab. I thought it should be, as its only and hour and half away... One bus- leaves 8.30am ( too damn early!!!!), service taxi, ie micro bus leave 11pm at night ( too damn late) and the taxi from the hotel was going to cost 250le!!!!! NO way! In the end a friend managed to baragin a taxi price for me so i got there for 130le.

The taxi driver was a friendly fun guy... although wasnt' shy to tell me that he had his bango (grass) with him and did I want to see it? totally high. thankfully since there wasn't really any traffic on the road it wasnt' too dangerous! He also wasn't wearing a wedding ring and said he didn't have a wife etc etc ( and next day when i came back with my friend Sherif in the car too he had suddenly inherited a wife and ring!!!!!!)
The interesting and stressful part of the journey is all the numerous check points. They check the drivers license about 6 times between dahab and st cats, and they checked mine too. each time saying he couldn't go or shouldn't ( he didn't have a 'taxi' licence for outside of dahab town centre) but if he brought them a phone card or sandwich on the way back that would be ok. All corruption, in the form of call credit!
At st cats there is really nothing apart from the monastary and a couple of shops and a post office. I met sherif who had arrived an hour before on the bus from Cairo and we went to a campsite called the desert fox. the people there seemed really stoned- but very nice and helpful and they fed us and we talked into the wee small hours around a campfire in a bedouin tent. Mostly in arabic ( so that was really nice practise for me- although the bedouin accent is VERY differnt from Cairo!!) 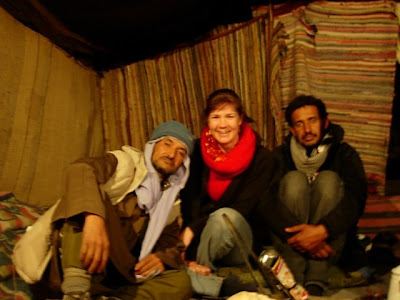 The range of conversation topics reflected the vibe of the place; it went from Mobarak ( who they think is close to God) to Van Damm ( something to do with a certain karate kick he can do....) to the great bear in the sky, to demons and devils. wow.
At 1am we left the heat of the fire- put extra layers on - and started our climb to the top of Mt Sinai ( also known as Moses mountain!). We had met a girl from Malasyia (Cindy) and she joined us for the climb. Its a pretty long way ( 2285m high!)- and I was sure my leg muscles were going to give me a lot of trouble, but we took our time and it was fabulous. in the full moonlight the white rock on parts of the cliffs looked like frost or snow... we didn't need our torches until the steps near the top and most of the time we were the only people in sight. Amazing. Almost bumped into camels in the dark! We took the 'camel' route... because although the other way is more direct, with its 3750 steps it was just not an option!!

At the top of Mt Sinai there is a chapel and a mosque. sorry the pic is fuzzy- camera was still on 'mountain' setting!!! 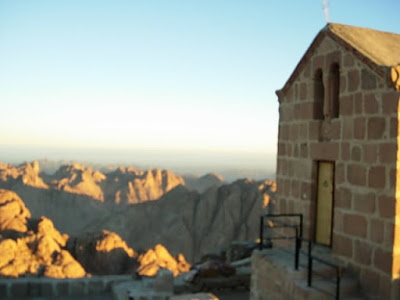 Just as we stepped onto the summit the call to prayer started from the mosque ( a small square room with one man inside!) . It was spiritual and uplifting- except that there was a man trying to to rent us blankets (for 20le!!!) and he wouldn't give it a rest so he talked all the way through the prayer which really annoyed me!!! 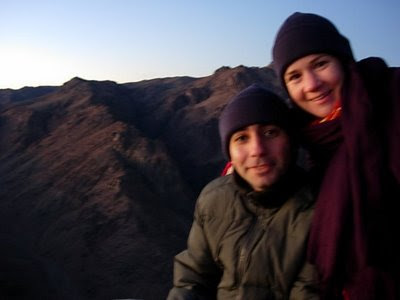 At that point though we were the only tourists on top. Sat night is a quiet night because the monestary is closed on a sunday... and people tend to visit that in the morning when they climb down the mountain... 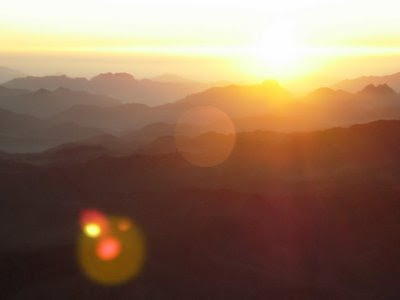 but if all you want to do is watch the sunrise in peace- i really recommend a sat night- esp if you have the full moon to help you find your feet!!!! 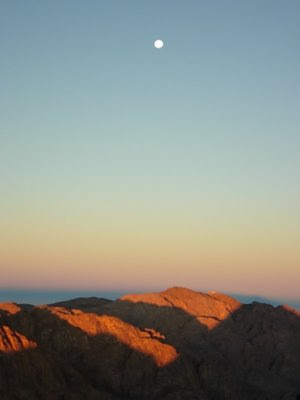 The sun took a long time to rise- but it was amazing. The desert mountian looked like a set from Mordor (lord of the rings) 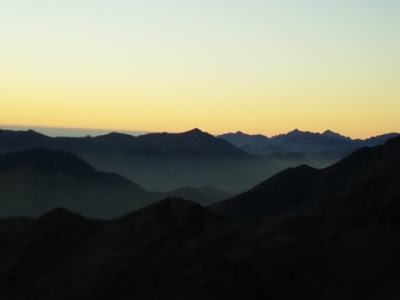 and then when the sun was coming up it turned into a Colin Baxter photograph! 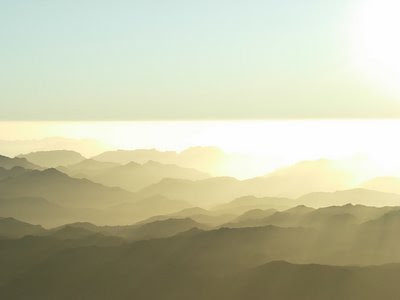 Very very cold ( but we refused to pay that for a blanket!!!!) but very very uplifting and beautiful!!! 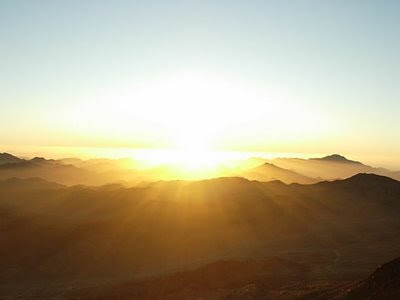 I took over 100 photos and then its was hard to choose which to include here because it all felt so amazing. Looking forward to Cindy sending us copies from her camera ( which was far better than mine)! We saw a bedouin waman walk her donkeys up the same path we had been puffing and panting over on the way up- she must be super fit to do that everyday!!! 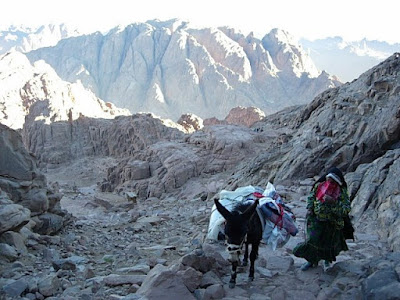 wonderful , beautiful. I'd do it again! ( but not until my calf muscles have recovered!) 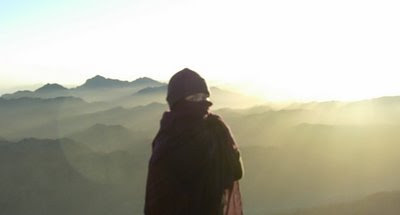 We took the taxi back to Dahab ( so another 130le) but discovered that the guy from the desert fox camp could have got us on a service taxi for 50le each at 11am ( but we didn't know this when we booked our taxi!!!)
Another day of chilling on the beach (- I know- I have a hard life!) then the 10pm bus back to Cairo ( got us in at 6am) Since I had had 4 hours sleep on friday night, then climbed a mountian instead of sleep on sat night, sunday night I slept the entire 8 hour bus journey!!!!!!!!!!
Back in Cairo... and off to Salsa tonight ( trying to loosen up those muscles before work again tomorrow!)
Posted by Lorna (aka BellyLorna!) at 3:55 pm

wow the mountain is so beautiful, i never climb it cuz i don't feel comfort with heights.
you are so brave to ride with a stoned driver, no i knew why innocent tourists die and lose their beloved ones :(

anyway good you came back not in a coffin, i congratulate ya dear.