Both had small audiences.... but you can blame ‘Egypt’ for that... not me!

Yesterday was the 2nd year anniversary of the day that Mubarak stepped down. I remember I was sitting home glued to the TV watching the news. As soon as the announcement was made I received a phone call from two friends in London, Caitlin and Ellie (back in the days when she was Ellie ‘in London’ rather than ‘Ellie Of London’ the Rising singing star of Cairo!). They too had been watching the news from UK and I remember the elation we all felt when it became obvious the voice of the people had been strong enough to bring down a dictator of 30 years. I, in true Braveheart style, was laughing and shouting’ Horreya Horreya’ (freedom) down the phone!

Ah those were the days. Two years on and so much and yet so little has changed.

Last night yet again Tahrir filled up with people..... but so did the area around the palace, the latest protest location of choice. Tahrir was calm, thankfully, and emptied early. At the palace though things were violent however and the police were again filling the already polluted Cairo air with Tear gas along with bird shot and water cannons to ‘calm’ the protestors! It seems the people there feel that the objectives of the revolution have not been met at all and the dictator has just been replaced with another one, Morsi, the ‘puppet of the Muslim Brotherhood’.

So knowing all that is going on in the city- would you chose to go out clubbing and dining out, or would you sit home and have a quiet evening to yourself? Exactly. However a few brave souls did venture out... so the entertainment (me and my band) were called into work....

My first performance was at my usual place of employment... the Pharaohs’ cruising restaurant, Giza.
I arrived feeling flat. I had no energy and no inclination to dance at all. The boat one had one deck full, and actually full is the wrong word for that too. Like I say, most sensible folk stayed home! I have yet again new member in my band, another new Tabal and a new Org too (keyboard player). I do love to dance but on this occasion I felt I would be going out there and ‘jobbing it’ given my mood and the mood of the country and my uncertainty about what the music was going to be like.

I entered the stage, big and bold and strong. They say that people’s impressions of you are created within the first 3 seconds of seeing you, so I always try to force myself into a confident state for the start of a dance when I don’t feel it – fake it 'til you feel it you could say. I scan the faces of the audience during this time and all I usually need is someone who is paying attention. Now that might seem weird to those of you who dance in Halfas or in theatres etc where everyone is sitting watching the stage waiting for you to start, but here in Cairo, usually the time the dancer comes to stage is exactly the same time as the food... so often people are understandablely distracted! Thankfully, one Egyptian woman right at the front was watching, then when her daughter tried to talk to her she brushed her away saying ‘no, talk later, I want to watch her, she is good...’
That was it. My confidence lifted and I proceeded to perform possibly my best show for quite some time. It is amazing how suddenly everything just worked. The music was great, the new Tabal will need time to get to know me more, but he didn’t do badly at all. The rest of the audience was fabulous too. There were mainly Egyptians and Syrians, and everyone was very appreciative and responsive. I love dancing and having people, especially the women, singing along with the songs at me... sharing the moment with me. To see how much they love the music, and how it makes them feel and they can see that I feel the same. That connection is the most amazing feeling ever. It makes them happy, and that makes me happy! On the boat I am supposed to perform for two sets, each lasting only 15 minutes... on nights like this I usually get into trouble because I am enjoying myself so much on stage that I run over my allotted time. Last night was one of these nights.. but the staff and management were enjoying the show too, so I didn’t get into trouble for it! Who else out there loves their job so much that they happily do extra time for free, even if it means getting into trouble for it?!!!!

On the boat I can have anything between one and 4 shows per evening depending how busy it is. For the reasons I have mentioned above, it was as quiet as it could be.... which was a shame when I was in such a fabulous dance mood! Thankfully I had another show booked for that night...


After Eight is a small club/bar downtown that has live music most nights. It is not the sort of venue I would normally perform in... but they have decided to have an oriental night each Monday. Which actually means their usual mix of Arabic, house, r&b, pop, shaabi, you name it cocktail of music but with a bellydancer too...... The venue is located a 2 minute walk from Tahrir, so given then ‘party’ happening there I assumed that it would be cancelled.... It wasn’t. Although from the low numbers of attendees it should have been! What can I say... my friends and I waited and waited in case some more people arrived..... a couple did, but not many and then the manager and I decided that a short performance was better than cancelling completely. So I danced. Of course, this time it was with CD rather than my band- which I always hate in comparison... but actually in that setting it worked. It was like a private party and I think I was much more relaxed in my dancing because of that. I felt I was performing just for friends. 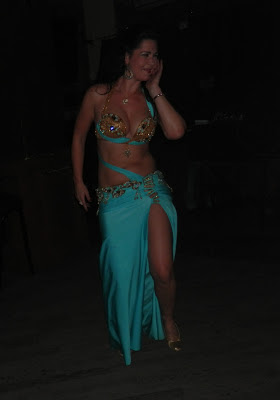 It is a dark place anyway... and there wasn’t any lighting on the dancefloor area... so all the people at the front of it took one guy’s lead and aimed the flashlight from their phones at me. It was an inspired move. The atmosphere was tangible. I felt like I was dancing in an old movie in my lovely turquoise and gold Eman Zaki costume. After, one of my friends told me that parts of my dance reminded him of Samia Gamal - so I guess my feelings came through in the dance since I wasn’t aware of doing anything like her dance style! I just know I felt special. I felt I was glowing (and I don’t mean that as a polite way of saying perspiring too much!) 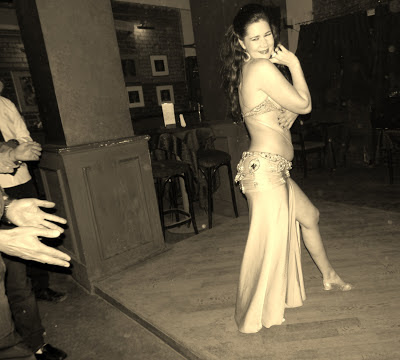 I know I should have been disappointed to have such a small audience, but given the circumstances and the select few that were there, actually I really loved it. Thank you to those who risked the unknown and came out to support me last night. I hope you enjoyed it even half as much as I did!

And... the good news is... that I will be dancing again in After Eight next Monday... so hopefully assuming Tahrir is clear for a change, we will get in a bigger crowd and I can perform my entire show..... If you are reading this and are going to be in Cairo next Monday (18th Feb.) please do come along!
Posted by Lorna (aka BellyLorna!) at 1:14 pm