Today was another busy day filled with lots of wonderful Cairo moments...

Square burgers at Route 66 in Maadi for breakfast ( i know- burger for breakfast????) anyway.. then after a drive round the pottery area in fustat then I went to Manial, to the Nilometer. not much in there... 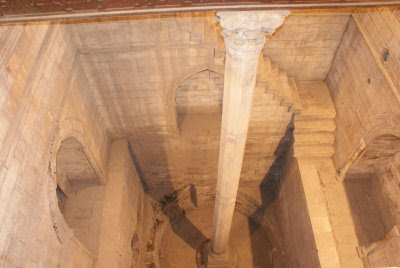 but its really old, with a very beautiful ceiling.... 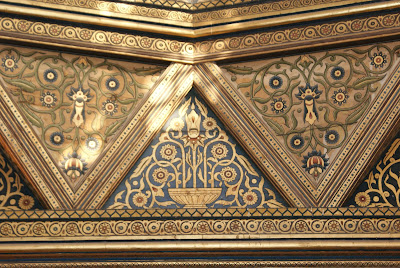 and Egyptians get charged a LOT less than tourists! The best thing there though was the peace and quiet. My friend and I sat by the Nile for about 2 hours- just soaking in the silent ( well- lack of 'dousha' anyway!!!) and watching the rubbish float by on the Nile... we saw some odd things. a perfect round of bread, an aubergine, a shoe... you can imagine I'm sure. The sun was shining and it felt nice to be chilling, but not chilly.

Next we went to the Cairo tower. I have NEVER been up this thing before... and always meant to... but its 65le for tourists and only 20le for Egyptians ( managed to get in as Egyptian so pretty chuffed!!!!). The view from up there was stunning... really. I wish we had got there maybe 10 min earlier so we could have fully seen the sunset... but it was still amazing....... highly recommend it.

Orangette in Zamalek is a cafe on Sharia Gabalaya and they do the BEST Oreo Madness dessert ever- its huge.... ice cream fans MUST try this one!!!

Then the big event for the day- the National Circus! 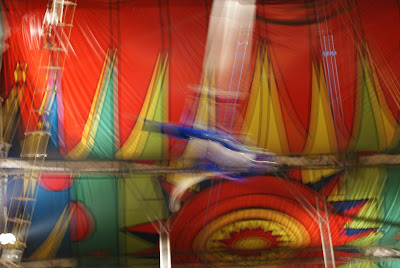 The circus is in a big tent ( no surprises there) on Sharia Nile, in Agouza (just beside the Balloon theatre). We had been told on the phone that the show was 8.30-10.30pm but that wasn't true- it started at 8pm.... and finished 10pm. Tickets ranged from 50le front seats to i think 20le for back. Front seats were worth it!!!

The whole tent smells unfortunatly of urine... assuming its the animals but.... well I wont dwell on that thought. However, the colours of the tent are fabulous- beautiful decor. Live band too througout entire show.

Dont know what we missed out on in 1st 20mins, but we saw clowns, jugglers, acrobats, rope gymnasts, cute dogs jumping hoops and skipping rope , knife thrower, trapise, everything really.... fantastic showmanship... I have seen a few dancers on stage both here in Cairo and abroad who could learn from these circus performers a few things about audience interaction and stagemanship. I think also that being on stage myself means I find it hard now to watch ANY type of show and not try to imagine what life must be like for the people on stage. Imagine being that girl in her hijabb standing in front of the board to have knives thrown around her - and seeing her eyes blink at every throw, and watching the silent prayer uttered through tight lips..... a huge new dimension to the show! 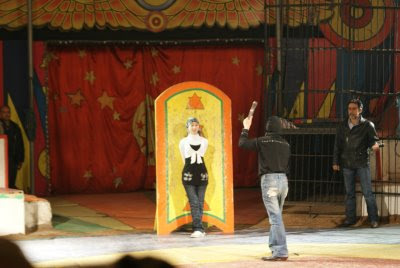 thre were even phtographers going round the crowd (mainly the arabs in the crowd...) with a VERY cute baby lion and a huge snake to wow the crowd and get some more money out of us!

beautiful animals. 6 lions and 3 tigers. in one huge cage with one man.... he handled them really well and they all looked well fed and fairly content.... not that I know a lot about these things ( but I had been very worried about that side of things after my trip to the zoo last year!!!). The speical moment in the entire show was one tiger- older and HUGE- did one jump from one podium to another... and I swear time stood still. It was like watching something out a kung fu movie where everything had been slowed down. This massive beast looked weightless in air... possibly the most beauitful thing I have ever seen... I could have watched just that over and over all night. I think that not only did my breathing stop during the second of the jump - but that my heart did too.... truely awesome- in the non american meaning of the word!

People who know me well, know that although I have nothing against animals, and quite like them really- I do not gush over them or even oh and ah much.... However, these huge cats were something else... and to watch this man risk his life in that cage with them and handle himself with such power and control was an experience in itself.

I loved the circus and will go again- inshallah!!!!

oh Cairo. Never, Ever, Ever boring!
Posted by Lorna (aka BellyLorna!) at 2:28 am

really i wonder 4 ur photo it fantastic

and i made a new blog 4 photos

if u want show it
on this link :

Hi Lorna, we are a Scottish family living here and we are going to go to the circus tonight so thanks for your very helpful blog. Where can we see you dancing? We'd love to see your performance.
http://scotsabroad.wordpress.com
Shona Davidson

Hi shona... I perform at the cruising restaurant boats the Nile Pharoah and the Golden Pharoah- they dock just beside the four seasons hotel at Giza. I'm there ofter, but not every night so best to phone to check I'm on before booking!
will be great to dance for fellow scots!