When my friend Vanessa was here from US for a few days she told me she'd really like to see the bent pyramid. To be honest- after so many holidays here and taking guests to them- the thought of more pyramids didn't really entice me much- but she was on her own- so I said why not.

Really glad we went. We hired a yellow cab for the day ( VERY good idea to have an air conditioned car with you if you plan to do this trip in the height of summer!!!!) The Dahshur sight is past Saqqara so a bit of a trek, therefore not many people make it out that far- which was a great thing for us since we were 1st there and had the place completely to ourselves! and the policemen there were very friendly and helpful (for tips of course) and even encouraged us to climb the remains of Snorfru's wife's pyramid! 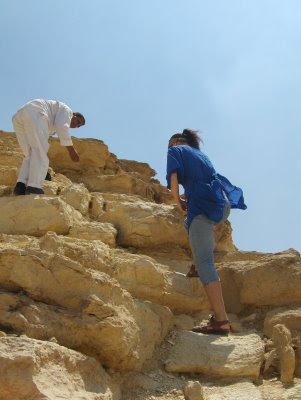 Snorfru ( father of Cheops who built the largest of the 3 main pyramids at Giza) built the bent pyramid but started the base at too steep an angle- so it had to be completed at a different angle so it wouldn't collapse. 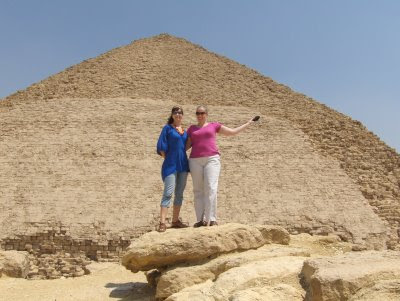 It is stunning to see because, unlike all the other pyramids, even those at Giza, this one still has its casing of limestone- so the outside is smooth and white. Beautiful. 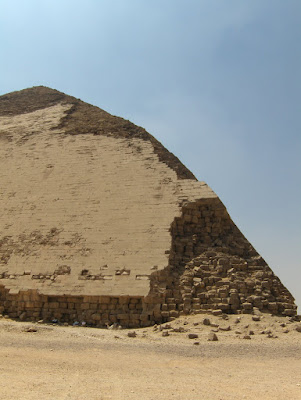 It's surrounded by desert too- not by touts and pizza hut!!! 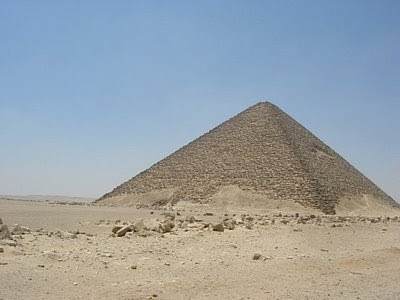 and we climbed inside it- despite there being no electricity so the whole thing was in complete darkness. We borrowed torches and climbed down- WOW- that’s a LOOOOOONG flight of stairs to be bent in two for while you attack those steps. The smell of ammonia (I believe from bats pee????) is very strong and the darkness, smell and distance made it a battle over fear just to get down the whole way. There are 3 chambers inside- but I have to admit- Vanessa and I had had enough with the 1st one and went back up those dreaded stairs again instead of going all the way! NOT to be tackled by those with asthma or claustrophobia!!! I felt I had both when I was inside! Still glad I did it though… even despite having to go to the chemist for strong muscle relaxants in order to be able to move at work for the next 2 nights!!!!!!!!!!!!!!! And I thought I was fit!!! Ha ha.
A wonderful experience and I will definatly advise it to future visitors…. The round trip in the yellow cab cost 140le, but lasted about 4 hours ad the air con was ESSENTIAL !!! so was 2 large bottles of water!!!!!!! 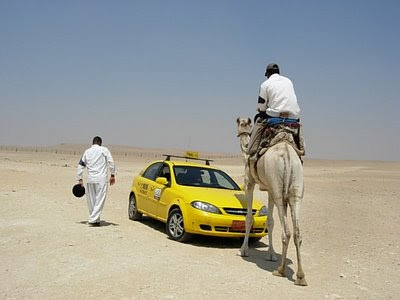