Today I have spent at over an hour in total, standing in the street, trying to hail a taxi.

I am always amazed how many taxi drivers in Cairo stop to hear where you want to go, and then refuse you. Well, they don't say no,  they usually don't say anything at all, just drive off after giving you a look as if to say 'Oh you want Zamalek? Nah, I don't fancy going there today, bye! '.

Surely any fare is better than driving round with an empty cab? I get it that maybe they have been pre-ordered and are heading to a certain destination, willing to take you if it just happens to be on their way anyway. But not all of them. Surely?

The worst refusal is when they don't want to go somewhere because they know, or suspect, it to be busy. The longer you stand in the street, being refused, the later you get and the more you dread the undoubtably slow, frustrating journey you have ahead of you... Especially when it's 40 deg plus outside!

Then, once you achieve the holy grail of hailing a taxi, that actually stops for you,  you have to watch that a) he has switched on meter, b) said meter is running at sensible rate (not 10x rate like one I took earlier this week who granted, when I complained, changed it to the non-tourist speed! )  and c) that the driver doesn't celebrate finding a customer by lighting up a cigarette.

Thankfully, I have usually found that if you catch the driver before he lights said cigarette and politely ask him not to smoke because you have a cold (andi bard) or are allergic (andi hassisaya) then they are more then happy to oblige you. They also tend then to drive you the fastest and more direct route so they can have their cigarette as soon as possible!!!

Heaven forbid you want the AC on though... It's costs money to work the AC you know..... So they will attempt to charge you double, or at least extra, assuming their taxi even has AC! Despite any advice from me that the AC only uses more petrol in the same way using you lights at night does they still drive around in the noise and the heat, as if by choice.

Oh and a little tip, so you don't go waving down any white car, just in case it's a taxi... And it took me literally years to realise this one,  Look out for the orange colour license plates. Although saying that, my last 'taxi' had blue plates and no meter- guess he is just out for some extra money during the Arab season (the windows were all tinted black and he had Quran playing loudly and was super polite). I don't advise travelers to Cairo get in anything other than an orange plated, metered taxi though.... Do as I say , not as I do! 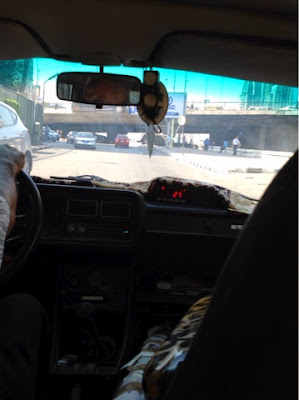