It's so easy to complain about things in Cairo... Things never seem easy. I have a tendency to be more negative than positive, which I know isn't healthy, so I will try to remember the things I take for granted and be thankful for them too...

I have done this once before, many years ago, written a blog about all the good things about living here... And here goes again...

Waiting between sets for my band to start, - I have a band!,

Between sets on stage - I have a stage!

At Bab el Nile restaurant in Fairmont Nile City Hotel- I have a contract in one of the loveliest hotels in the city and work visa to boot!

It's quiet tonight- but there is still work!

And the people are here are all Egyptian- I have Egyptians in my audience!

The wind is freezing- but freezing is relative,I'm dancing outdoors in April, ie it's not UK.

My labisa (dresser) failed to answer her phone yet again so I am here alone again - I normally have a dresser! AND a very Scottish point here- I have saved tonight the cost of her earnings!

Because I am alone and sitting in costume - a very pretty saidi costume!

I cannot go and tell my band their break is over- I get to decide my running times!

So I just have to sit and wait til I hear them play again.....


In Egypt I often get down. Yes, in a dance way, but also in a mood dip kinda way too. Doing even the smallest things seem daunting and difficult. Even just charging my phone, or paying a bill.  I get wound up by the smallest of things and yet other massive issues will land on me and I'll brush them off easily as if they were a mosquito. Rhyme and reason don't seem to play a part. I am often angry, frustrated, stressed, but never bored.  Never ever bored.

I remember my entire childhood going around saying I'm bored, over and over again.

I found my solution: Cairo.

Heightened emotions, negative and positive, but never boredom- that opposite of emotion. That dreaded, flat, dead state that drains me and allows the depression to grab hold. On the roller coaster of emotions that is Cairo, exhaustion is more likely to hand you over to the devil depression rather than boredom.

I must remember the emotions are good. Even the negative ones: anger and frustration.... And I must keep remembering to search for the good in each situation. That's my challenge. Wish me luck!

Oh, and by the way- when the band did play again, despite my frustrations in the changing room that inspired this blog entry, I went on to do one of the best shows I have done in a while. I felt alive and empowered and full of joy and strength. My band and I were on fire. The audience with us, small in number but large in spirit. (And by that I do not mean they were drunk!!) I left work feeling so much better than I had arriving there.

And that has to be the ultimate upside to all of this;  Doing my job makes me feel great.

Hurrah for Cairo and for dancing, and especially for dancing in Cairo!

And a huge thanks to Kay Taylor of Farida adventures who took this fabulous photo of me on stage at Bab el Nile.  Not the same night, but it's the first shot I have of me in action at my new venue! 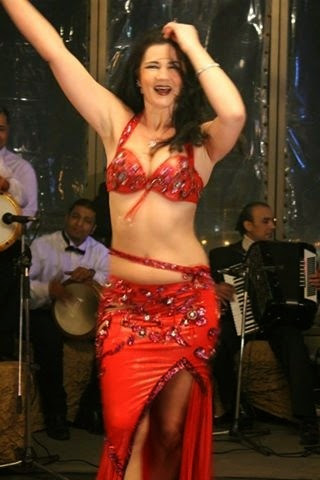