The woman of many names (and many spellings of her name!) The Lady. The star of the east. Umm Kalthum. Om Kalsoum.


The 1st Thursday of every month, Om Kalsoum, the fabulous 1st lady of Egyptian music used to put on a huge live concert in Cairo. These concerts would clear the streets as people would rush home to listen in on the radio and they often went on for up to 4 hours. Each song seldom lasted less than an hour!


In today’s Cairo this tradition is being continued by the Om kalsoum puppet show held at Sawy cultural centre, Zamalek.


Every month they choose different songs and put on a 2 hour show which involves a stage of puppets, the Lady herself and her musicians, ‘playing’ along to recording of the great singers work. On Thursday it was Al-Atlal and Hob e eh?

The concept is mind- blowing to begin with ... but what is more amazing is the way in which people were responding to it. Everyone settles into the music, sings along, filming it on their mobiles, bringing their friends and family along to join in the atmosphere. They even clap at the relevent moments within the music as if it really was the singer herself in front of them pausing for breath!!


I was amazed at young dad’s sitting alone with their young children, teaching them when to clap along. I saw young couples bringing in their new born for their 1st Om kalsoum concert. Older couples were sitting with their grown children and their spouses. It is the monthly family outing.


I asked one woman in front of me why she came to this every month, she said they came for the atmosphere. Sitting with other people to listen to this wonderful music. If you listen at home you are always distracted by jobs to be done around the house... here it was just the companionship, darkness and the music.  Her eyes gleamed when she talked about having the chance to ‘just sit and be with the music’. Her husband wanted to know if I understood the music. I said not all of it. The Arabic language Om Kalsoum used in her songs was very different from the ‘ammeya’ street Egyptian used today that I use. He said no no no, not that, the Music- do you understand the Music (i.e. not the words, the music itself). I replied of course I feel it- who couldn’t help but feel it? The music of Om Kalsoum was truely great. He was very satisfied with my answer. I was touched by his passion for it; a man in his 50’s talking in a way that you might expect a teenager to talk about their favourite band.


The puppets are skilfully worked and provide just enough eye ‘bubblegum’ to provide a visual focus and distract the younger children in the audience. They give you permission to get lost in the music. No fancy light show or gimmick. No fast changing video images to occupy your mind. ‘Just’ the music. 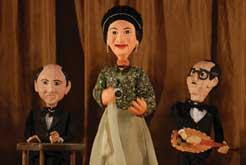 The young girl sitting next to me had come along with her family too. I was keen to know how and why she had attended. Whether it entertained her as it did the older family in front. Her sister had been the month before to Sawy, loved it and persuaded all the family to join. She thought it was a fun way to bring such fabulous music alive again. Despite being born long after the singer died in 1975, this teenage girl beside me knew all the words and was singing along too. She said she would definitely come again.


I wanted to interview every single person there and find out what it was that brought them to a puppet show...  I had all sorts of stories playing out in my head and was desperate to know if they were based in any sort of reality. What was it exactly that brought people here?  People who were dreaming about the ‘old days’ where one artist could bring people, and indeed a country, together despite difficult times? People who just needed to get some culture in their lives and Sawy centre provided an affordable, family friendly, space in which to do so? People who were friend and family of the puppeteers? People who wanted some ‘clean healthy acceptable fun’ on a Thursday night- somewhere their parents couldn’t complain about? I even imagined that there might be someone in the audience who had actually attended those original famous monthly concerts and were soaking in the nostalgia however the man in front of me assured me that this probably wasn’t the case, no one was ‘that’ old! (Although since these concerts continued into the 60’s, it would be quite possible age wise!) It would make a fantastic documentary I think... modern reactions to the music which once inspired a nation.


For me the atmosphere felt like an emotional wave we were all riding together... whatever our reasons for being there, Whatever our personal or cultural link with the music, Despite the fact that the musicians in front of us were being moved by strings. The music was still so powerful that you could feel when everyone in the room took a breath at the same time! The experience both made me feel much closer to Egyptian culture and people, and at the same time, much more removed. I felt an ache to hear and feel this phenomenal music as they do.


As a dancer I do believe that non-Egyptians can be amazing dancers. I have to believe that or else it would be pointless me being here and working towards my dream in the way I have over the past 7 years. For instance I don’t believe in the phrase-‘it’s in their blood’. Being Egyptian in itself doesn’t make you a better dancer; I have seen a lot of Egyptians who cannot dance at all. However, the thing which we will always be at a disadvantage, as foreigners, is this combined cultural history with the music. I certainly did not hear my first Om Kalsoum until I was in my twenties. There were babies in the audience on Thursday who were not even 20 weeks old yet. I imagine it would be automatic to express emotions in the music if you have seen your parents and grandparents singing along to it all your life. Even if you didn’t understand all the words, you would know, almost instinctively the music.


It’s one of the reasons I always say that just being in Cairo makes someone a better dancer... even if they never take a dance lesson while they are here... that soaking up of the way people are with each other, how they express emotion and move, how they listen to music. It has certainly changed dramatically how I dance.


I would now add, bizarrely enough, going along to a puppet show now onto the ‘must do’ list for any dancer coming to Cairo. The Lorna tip-  watch the audience rather than the puppets!


Here’s a clip of the puppet show that someone else has posted online for you- enjoy; http://www.youtube.com/watch?v=8J_ZmXcr-fY
Posted by Lorna (aka BellyLorna!) at 10:37 pm