More about my Chinese houseguests!


This was one response to my last blog entry about the Chinese bellydancers who are staying with me in Hotel BellyLorna just now.
“Fascinating story. But how, given their MUST culture, do they come to take up belly dance and arrange a group trip to Cairo?! Who told or allowed them to do it?”
The writer has a point. To break away from your own culture to study something unusual and different is rebelling enough. But all of us wherever we are in the world have experienced this.
I recently started a hashtag on twitter #10QuestionsAwaysAskedOfABellydancer and it was interesting that all over the world people ask the same, stereotyped questions regarding the dance. What do your parents think? What does your husband think? Do you do ‘private’ dances? ... They all showed off the common thinking that what we do is something questionable morally.
It is not. Not in my mind anyway.
This dance is an art form and it can be as beautiful or as ugly as the personality performing it!
If you do not respect what you do, of course it is difficult for others who watch you to respect you!
If you love what you do, then people will love you when you do it.
Simple

But I digress. Seemingly this group of girls, who didn’t know each other at all before coming to Cairo together, had linked up via bellydance on a social network system called QQ in China. One girl who had stayed with me last year said I want to go, but I don’t want to go alone... who is with me? Simple.
One of the girls captured a few lovely shots while they were here that i think show the fun we had! 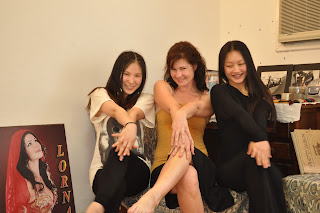 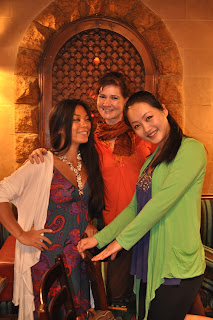 Out partying the last night away at Khamseena in Mohandiseen. A lovely cafe where they have fabulous live bands- but be careful - they put an extra 30le per person on our bill at the end of the evening saying it was 'for the band'. In addition to the entertainment tax which had already been included. I dont mind giving the musicians money, but I dont think that money will actually go to them.If you go there- make sure there are no hidden costs! I wasnt impressed since I go there often and this was the first time they had done this to me! 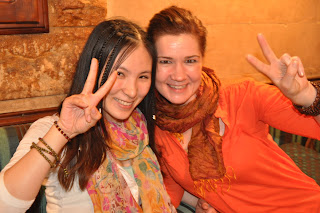 Its always great having friends visit.