I've had lots of work this week... and a little going out too!

Salsa at the Hard Rock Cafe on a wed was packed last week... a really good night ( esp since ladies get in free!!!) It was a white night (hence everyone in white!!! but I wasn't planning to go cos i didn't think i would be able to get away from work so early!!!) 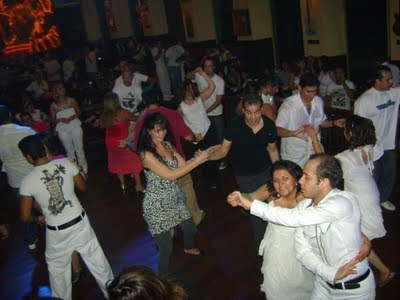 Thursday night was quite an experience after work I went to Africana club on sharia Haram.... i had an AMAZING time. But then I do have a bit of a passion for R&B and hip hop and all that sort of music... so I just boogied the night away ( its open til 5.30am!).

Work was great on friday night (despite a dodgy stomach!) since my friends came in a big group to see me dance and I just LOVE dancing for people i know! 4 eventful shows.... 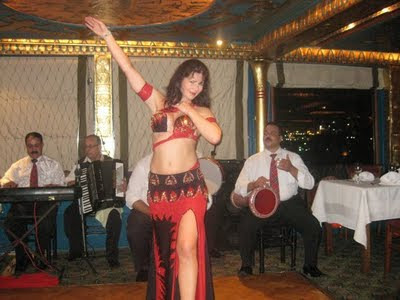 The 1st sail i had a guy there with a group who had read my blog so i met him in person which was a bit strange, but nice, and they were a lovely group and one of them danced with me too.

Upstairs we had one of the football teams who are in town just now... an African country ( I didn't ask from where cos i didn't realise til after that they were a team!!!) anyway the world under 20's football competition is being held here in Cairo just now- and they were a fabulous audience- lots of 'ooohs' and 'ahhs' and 'wows' when I did certain moves!!! was very rewarding as a performer!!!

My friends who came to the 2nd sail enjoyed the show too and gave me lovely feedback.The main comments being surprise, many of them are Egyptians and they did NOT expect a foreigner to dance as well!!! Here's a photo of some of us! 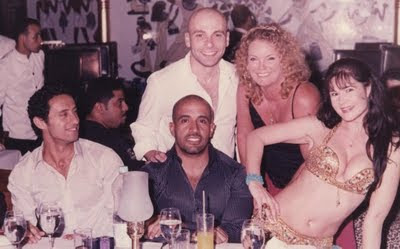 and then there was a wedding on the last show where all the old hyjabbed ladies were clucking over me which is always a great feeling and people got up and danced. a good night

I was shattered after and we went out to Mojitos (on top of what is now called the Nile hotel) and is a 200le min charge!!Its a lovely view- but a heck of a lot to pay if you are not planning on drinking alcohol!!!

last night something REALLY strange happened to me...... I finished work really early (10pm) and then i turned down invites to go out!!!!! ( for those who know me they know this in itself is worthy of note!!) and then I came home and did 4 hours of housework!!!!!!!including an hour of ironing !!!!!!!! I have NO IDEA what pocessed me. Maybe because I haven't really been home alone for over a year now (what with the renting out my spare rooms going so well) But for some bizarre reason the bleaching of my dishcloths took top priority!!!!!!!! I felt like I was being driven (even had to disinfect the doors and buttons on my lift!!!!). Its the sort of behaviour you expect from a woman about to give birth- and believe me- that's NOT the case here!!!!! strange.

Email ThisBlogThis!Share to TwitterShare to FacebookShare to Pinterest
Labels: All about Bellydance