I've been back in Cairo nearly a week now- and there is lots to write about, but 1st a whistle through of my tour in West Midlands!!!

I went down to Birmingham on my last weekend before heading back to sunnier climes, and stayed with a friend there. We went out to do lots of shopping of course!), and what stuck me about the place was this HUGE mix of nationalities. I am not used to that. In Scotland there are so few 'foreign' faces, and also in Cairo- the same. The mix in that part of the UK was stimulating to the eye! In one clothes shop queue, I spied at least 20 different nationalities (despite the fact that they all might actually be 'British' )- it was a long queue! 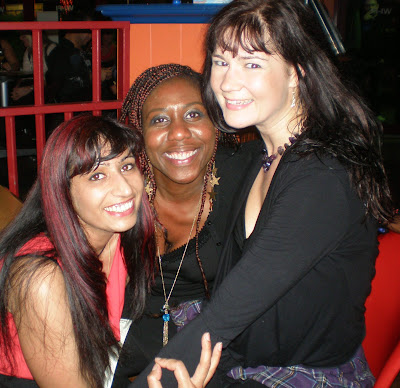 Out with 2 friends (one Jamacian origin, one Pakistan) we were nicknamed the 'United colours of Benetton'!!!- 3 nationalities together.
The mix is refreshing and interesting and I really enjoyed being part of it.
Maybe even more so after my experiences here in Cairo and at home; one as the minority and one as the majority. It was nice just to be part of the mix.

I performed at a Salsa Brava night one night… went well, I think, most feedback was good anyway. I didn't feel very good about my own dance- but am beginning to accept that maybe I am just a little too much of a perfectionist….

The workshops in Birmingham were fantastic- I REALLY enjoyed myself. We had a fabulous huge venue, fitness first, and the people who came were lovely. I really got into it and enjoyed the workshop possibly more than them (although again feedback was great- so I'll not put words into others mouths). Some emotional moments too.

We had quite an Arabic night… at the Moroccan restaurant, Zagora and there was a dancer there. 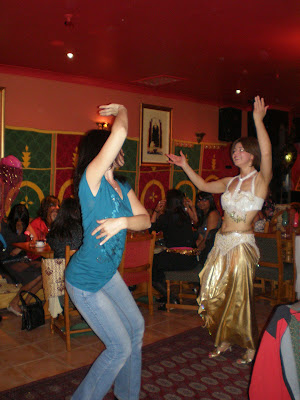 Not really sure she knew what had hit her though when we all got up to join in!!!!!!!!! 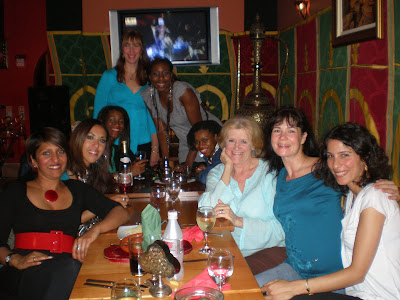 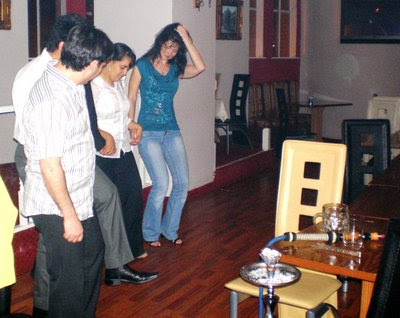 A very good night- not sure I got that debka though at all- was laughing my head off the entire time- IMPOSSIBLE to count! was fun trying to talk in Arabic again too- hadn't realised how much I had missed it!

Coventry was a new place for me to teach in, and the teacher based there, Diane Cox was just lovely and supportive, even cancelling a workshop she had planned for that weekend so that she could send all her students to me. VERY supportive and some really lovely dancers there too!

Then my 3rd city in one day… Lisa (a lovely dancer and teacher from Birmingham) had found out about an Arabic night in Manchester so we headed on up to see the 'Nile Band' perform in the Iguana club. I managed to restrain myself at 1st- but before very long I ended up on stage entertaining everyone (surprise surprise!) I really enjoyed myself- LIVE music in UK !!! fab. I was sorely missing my band back in Cairo by this point! I got a lovely reception from the audience, and the band, and it was nice dancing in UK to an audience so enthralled! I was once told, by someone who knew what he was talking about, that I'd never make money from dance- because I love it too much- ie I 'give it away' free. But you know what- I don’t care. Its about so much more than the money! (although I am not knocking that either!!!!) 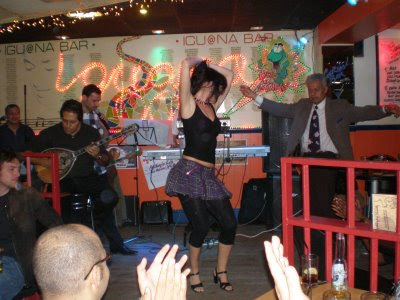 I made a lovely discovery in Manchester. When I had been watching some of the other ladies up on the dance floor do their thing (before I took over!) I picked out 2 or 3 that I really thought had something special. When I spoke to them after- turns out they go to workshops with my teacher Sara Farouk, whenever she is in Manchester! Amazing how a teachers influence shines though in a good student! Credit to the teacher!!!! 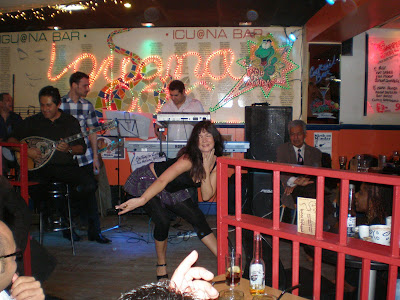 Really enjoyed my time in West Midlands- and looking forward to returning (hopefully in March '09). Thank you to everyone who made that weekend possible, Sugrah, Lisa, Diane, Salsa Brava and all the guys in Zagora and Syriana and in the Nile Band!
Posted by Lorna (aka BellyLorna!) at 2:26 pm

Email ThisBlogThis!Share to TwitterShare to FacebookShare to Pinterest
Labels: All about Bellydance, Me in UK

Hi Lorna my name is Christine. Elise (my friend) and I spoke to you at Iguana bar in Manchester after being mesmorized by your amazing dancing. You mentioned you were trying to organize workshops here in Manchester, did you manage to arrange anything?
As I mentioned to you we would definitly be interested in taking your workshops. You were a pleasure to watch and your skills as a dancer are brilliant.
Can you please let me know.