apologies to my blog readers...
Facebook has seriously taken over....

now whenever something happens in my life in Cairo - instead of tunring it into a blog article, with lots of relevent (well, sometimes relevent) info and stories, it becomes a one line status update. NOT good... especially as this blog is supposed to be my memory aid for when i am old and grey and come to write up the whole bellydancer in Cairo experience into a book... (that is , once I no longer live in Cairo and can actually dish the dirt hehe!!!)

anyway- whats been happening? 3 parties in 2 days... and all very diffferent!

I performed at a birthday party on Eid at a friends house... it was great. I danced to Enta Omri, which when i had 1st put it onto the cd had thought maybe this is too heavy for a party... but then I thought- why not, i love it and want to dance it. So i did... and the atmosphere in the room became electric once it started... at one point i started to sing outloud (it was an instrumental version of the song) and about 15 people, mainly egyptian women , all joined in the song... and i swear I nearly cried. I felt i had really, finally made it- I belonged. I fitted. I hope i never forget that feeling, it was so emotionally overwhelming!

after the party i went along to catch the end of the opening gala for the Nile Group festival. I had missed all the dancers, but the Saaidi band were still playing and my houseguests were all there dancing away as was my friend Aleya. So we all had a boogie together and Magdy el-Leisy dragged me up on stage to dance with him. We had a fabulous time! Just wish I could have been there for the whole thing... was nice to see and chat with Camelia at the end, but wish i could have seen her show too, not to mention Asmahan and Nour! ah well, next time!

Yesterday I went to another party, but not to watch or perform dance, for a change.  Through my writer friend Linda, I have met some swiss artists who are here in Cairo on a residency and they invited us to their studio for a party. The strange thing was that this studio is on an island, in the Nile, in the middle of Cairo (just near the pharonic village) and you have to access it via boat (which cost 25p each way, Egyptian piestres not pence that is !!). There are no roads on the island, and its all fields and palm trees. I really felt I was out of the city in the middle of the countryside. It was lovely and peaceful. Linda performed her poetry with 2 friends who are musicians backing her up. They performed in a 'cage' on the roof- a space designed to keep away mossies... and which was well lit so made a bizarre, but fabulous stage! at one point, to take a call, after the show, i wandered over to another place on the roof and found myself looking over the fields and trees and Nile, with complete silence around me, and started to dance, just for myself, no music, but I felt so free... I can see why they chose that spot for the residency studio- it was really inspiring!

Here's Linda in her cage stage' !! 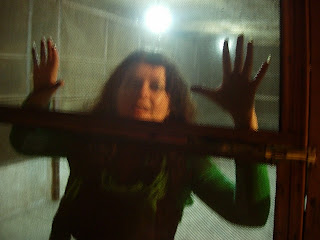 Email ThisBlogThis!Share to TwitterShare to FacebookShare to Pinterest
Labels: All about Bellydance, Emotional journey