Learning from The Fringe; a bellydancer's take on learning from other performers. Chapter 1


One of the most fabulous things about living in Edinburgh once again, is the Edinburgh International Fringe Festival. It is huge. Officially the largest festival in the world. 50,266 performances of 3,269 shows in one city within one month.

Music, drama, dance, comedy, you name it. It's all there. Some shows are huge and pricy, some are completely free. There is something for everyone.

I decided long before August came around that I was going to dedicate the month to seeing shows rather than performing them. Being entertained instead of doing the entertaining. Before I lived in Cairo, I had performed my own shows in the fringe many times, 9 shows in 9 consecutive years. Everything from African dance in my days with 'Afridonia', to 'Latino Arabesque' (combining Latin dance with Bellydance), to pure solo Bellydance shows (usually with some narrative to educate as well as entertain!)

This August , I wanted to see EVERYTHING. Which of course, is actually physically impossible.
I did however manage to see 35 shows in 3 weeks. Admittedly, I do now have fringe fatigue. Understandable, I think!

I purposefully also chose mostly shows which were not dance related. Just for a change, and also because, as artists, there is many things we bellydancers can learn from appreciating other performers work.

For my own development, and because I thought it might be of interest to other fringe attendees (and especially to bellydancers) I wanted to write up my findings from these shows. I hope you find it interesting and useful too! It has been amazing to me, how many things I could find from non Bellydance related shows that could make me rethink some of the ways I perform Bellydance!  Even if some of those things learnt were what 'not to do'!

Since I went to so many different shows... I will be writing this up over a series of blog posts ... Otherwise you'll be here all day!

The Tap pack- This was an all singing all dancing (Tap), all male show. 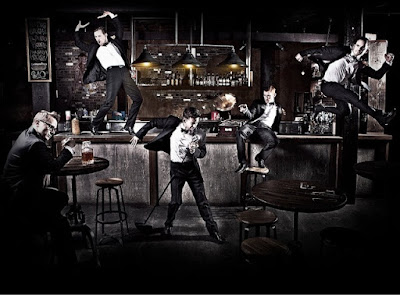 A five star show from beginning to end. What got to me especially was the part just prior to the beginning!
Before the show was due to start, one of the dancers came out and sat on front of the stage while the room was filling up. He got people clapping along and brought someone from the crowd up on stage with this too. There was laughter and music and skill, all mashed together.  It instantly changed the atmosphere in the room. He spent maybe 10 minutes building that rapport with audience right at the start of the show, before the curtains had officially opened, showing he was personable,friendly and fun, as well as talented.
I could see how this approach relaxed the audience and got them on side before the show had even started.
I've often told people in workshops that if you make a good impression in the first 3 seconds then your audience will be rooting for you during the whole performance. The Tap Pack took this idea and ran with it.
It also made me think of the difference I feel performing at a hafla after I have taught workshops versus before I've taught.  When my audience have already been taught by me, they are always more relaxed with me than an audience who hasn't 'met' me yet. They laugh more (I always try to add humour into my shows) and they interact more, and they respond more which, of course, makes the show much more enjoyable for everyone there, myself included.
The Tap pack's show opening prompted me to think about ways to achieve this connection with an audience right from the get go.

Another thing they did, which I loved, was they announced that it was not permitted to record or photograph the performance, but, that the next 1 minute only would be dedicated to selfies! They pulled lots of poses and everyone clicked away, got their momento for Facebook or Instagram or whatever, and then when that was over everyone could relax and actually just watch the show! What a fabulous idea, I'd love to be performing for a sea of faces, rather than an assault of cameras and phones, maybe this is a good one for Hafla organizers to pick up on?!

If you hear of The Tap Pack performing near you, I highly recommend it!!!

That's all for now.... More shows and the thoughts they inspired in the next blog...
Please do leave comments for me.... Let me know what you think and if these musings of mine are of any use/interest to you!
Posted by Lorna (aka BellyLorna!) at 11:24 am