Tartan and Bagpipes, Tabla and Bellydance.

It was all happening at the BCA club in Maadi last night!

I was so happy to do something I have wanted to do for a LONG time in Egypt. I performed Egyptian bellydance in a tartan costume alongside a Scottish bagpiper and an Egyptian Tabla player.

The audience was mainly British, with a few Egyptians there too.

I was in my element. A Comfortable environment, lovely audience and talented musicians. Who could ask for more?

But the joy of joys.... to be able to blend in the music and dance of my birth country into that of my chosen one.

It was like being able to be 100% honest and open about who I am.

I have to thank Alan- for his talents on the pipes, and being prepared to take a risk in doing something new. He rose to the challenge perfectly and I suspect strongly there will be more collaboration in future!

I also have to take my hat off to my Tabal, SimSim. Before we arrived at the BCA, he hadn’t even heard any Scottish music and the only bagpipes he had heard were those often played here, by Egyptians, at Zeffas (the wedding procession). He really didn’t quite know what to expect.

Our ‘prova’ (rehearsal) consisted of Alan, SimSim and I standing in the bar, Alan with his chanter playing the songs I asked and me trying to explain what I wanted from the Tabla. 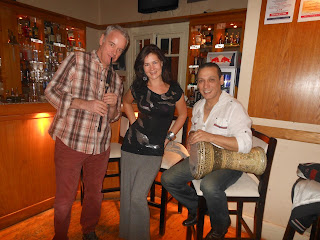 At first it was confusing. Partly because the whole thing was so new and partly because I was trying to explain things I really wasn’t sure how to talk about in Arabic! At first SimSim thought that if the song had a ¾ rhythm, then all he had to do was play a waltz rhythm beside it and that was what I wanted. It took a little time so explain that when we hear these songs on the pipes the rhythm is intrinsic with the melody, you just feel it- you don't have to hear it. It was interesting to see how it took him time to 'feel' the main beat. It reminded me of my first attempts at understanding Egyptian music and it's rhythms. Something that Egyptians 'just feel'. A eureka moment for me. I explained that his job was to add in the ornamentation, to follow my hips since the pipes would be carrying both the melody and the base rhythm. When he at last understood it was like seeing a light bulb switch on and the music just spilled out.

On stage we did many things, including mixing saaidi rhythms into Scotland the Brave where I mixed up hip droppy ‘pas de bas’ with saaidi horse step (anyone of my students from many moons will now be remembering the ‘dashing white pharaohs!!!). Dancing while brandishing a sword instead of stick. I even put the swords on the ground and danced over them in a highland sword dance style.

We performed maybe 45 minutes total over the course of the night and it was as exciting for us all as it was for the audience I think! We looked like we have worked together for a while; no-one watching could believe it was a first. I do hope we get the chance to work together again soon!!!

Thank you BCA for the opportunity ( I had wanted to do this at the St Andrews Ball my first year in Cairo and was told at the time it wasn't Scottish enough! Yeah right!)  and thank you my very talented musicians for being so open minded and enthusiastic.

I would have loved to have seen your performance! I have only been dancing for 3 years (belly, tribal/fusion) and 5 years danza azteca. Am navajo and found out recently that my father was scottish
..so the bagpipes speak to me in the dance. Do you travel to the u s for performances?