Last night i went along to the opening show at the Pyramisa with the girls who are currently staying with me in 'Hotel bellylorna'. If you are attending the workshops in the festival- and pay for at least 7 of them... then you get opening and closing night shows included in your registration fee. Otherwise you pay $50 for a ticket. When i heard who was in the line up for the opening i decided it was well worth the money and a night not to be missed!

Saying that- The night must have started pretty much on time, since when we arrived, only a little late (Cairo style) Nour had already performed her 1st number of the night. She was elegant, and fun and beautiful and gentle... a show that was worth the entrance fee on its own! We all especially liked her khaleegy which was again, soft and passionate... when she whipped her hair round, you really felt is was the enjoyment of the move which instigated the action... rather than because that is 'what you do' in khaleegy. It was a bit like watching a cat stretch in fact. Mesmorising. 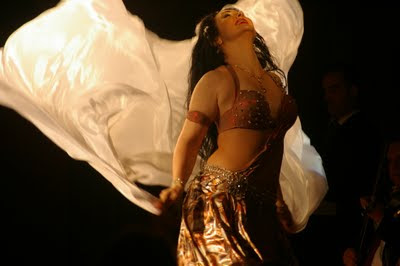 After the buffet (an experience a lot less traumatic than usual due to the destressingly low numbers in attendance of the fesitval this year since the revolution) we watched a dancer i hadn't seen before, Margurite (forgive me any spelling mistakes here please!) She is russian.. but has been taking lots of lessons with Lubna Eman ( a lovely lady and obviously from these results, a very good teacher!) The style was 100% Egyptian... which as all foreign dancers knows is our holy grail... to be mistaken for Egyptian while on stage! The only thing i think that would have improved her show was maybe less choreography. Although everything she did was moves perfect... I felt she kept herself safe away from us the audience. Mind you, nerves alone could do that to a girl i guess! 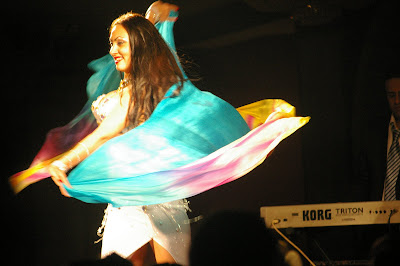 Tito was next on stage... with backing dancers who were all dressed differently but all dressed in past Tito costumes- it was bizarre- like a lookalike competition. Novel idea though. In the group that went with me... 2 of the girls hadn't ever seen him perform live before, so they were, of course, enraptured. He does dance in the most manly way out of all the male oriental dancers i have seen, although the headscarf he was wearing didn't get lifted up like hair and flicked an inordinate number of times.... A fun show with him standing dancing on top of a tabla too. 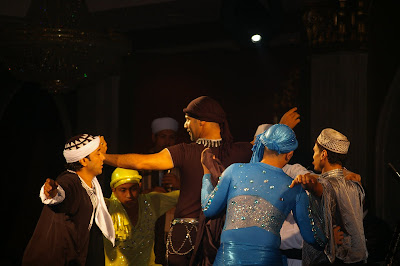 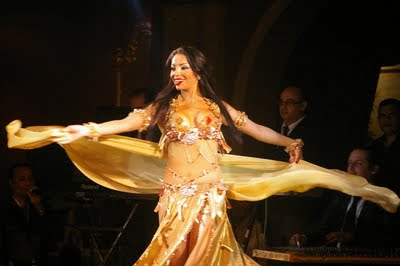 Her dance was the most contained i have ever seen her dance... and i think that added to it. Her main piece in her show was a reproduction on a moulid (holy festival) and there were stilt walkers, 'punch and judy' puppets, tannnoura, fanoon, a fortune teller, jugglers, even a wee old man 'selling' erk soos (a licorice drink). She came and went during this carnival in about 5 differnt costumes... and it was a entertainment on a massive scale. unfortunalty though... becuase her dancing to me was so lovely in her 1st set, i was frustrated because i wanted to watch her dance again... rather than the circus show (as lively and entertaining as it was!) 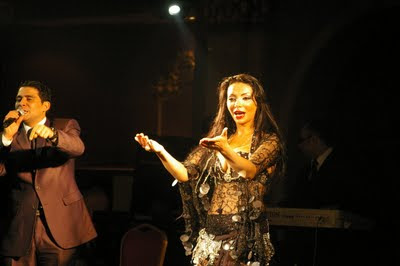 Last but not least, Asmahan. Her entire band were wearing shirts made from the egyptian flag, she was carried onto stage in a box made from egyptian flag and her 1st costume was a 'brides' dress with a full net black skirt, white and gold eagle on her stomach and a red shawl. 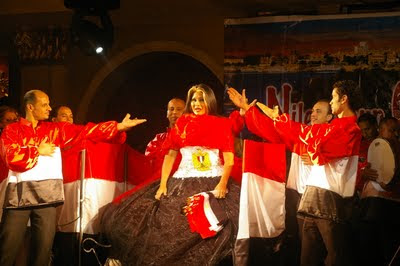 .......these she stripped away to finallly be wearing a very tight very revelling costume of red whie and black. My 'flag' costume looks like a galabeya in comparison! 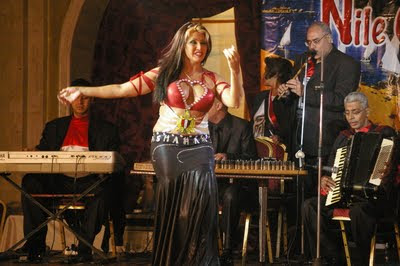 Her dance was lovely, and very soft.. which is always what i though i would like to see more in Asmahans dancing... but it felt more like the passion or power had disolved a bit, which was sad. It's not a surprise though... She is not based in Cairo anymore, so no longer getting her daily high energy exercise fix in her show each night. and she is not the only one to have less daily practise! All of us dancers in Cairo are performing much less since the revolution since the numbers of tourists in town will take time to increase and people are employing dancers less and less at weddings.... 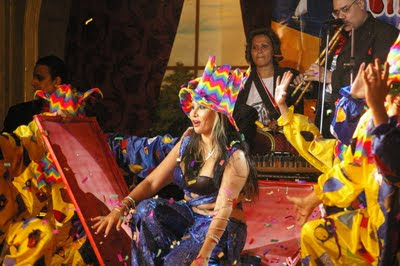 What i will say about Asmahan however is that she has always been one of the most welcoming and interested and caring of all the dancers here in Cairo. When i first arrived here to work she gave me a lot of very good advice about work here. A very generous lady- and this comes accross in her dance too. A nice shot of Asmahan and Khaled Mahmoud- 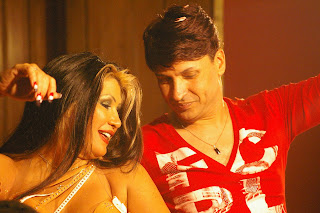 I have to give credit to the Nile Group organisers who cannot possibly be making any kind of profit with such low attendance levels... but who, despite the cost to themselves,  put on an amazing show for us all the same. This surely is a fantastic festival to attend.. since there won't be any issues of having difficulties seeing the teachers at the front of the classes! I recommend you support it and Egypt and come to the next festival if you can!

I also have to give photo credit for al these shots to the lovely Delia Lewis who is currently staying in Hotel Bellylorna with me. Thanks for letting me use them here D !!!

The entire night ended after dawn.

Hehe- thats stating the obvious isn't it... I mean.. the entire show finished at dawn when we jumped a taxi back to Hotel Bellylorna to dream of shimmys and hair flicks!
Posted by Lorna (aka BellyLorna!) at 10:03 pm

Gosh you painted such an awesome picture but I'd love to see some pictures.

You always make me yearn to go back to Egypt!