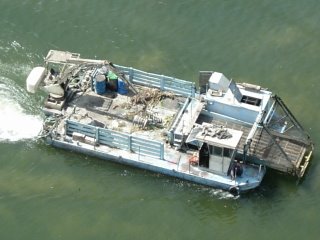 I'm sure there is a proper name for this type of boat- but until I know it, it's the Dredger- what it pulls out the bottom of the Nile I dread to think….


The Egyptians have had a very different relationship with the Nile. For thousands of years, they referred to its annual flooding as the "Gift of the Nile." Each summer, like clockwork, the river would take possession of a strip of land on either side of its banks. When the water receded, a very thin, evenly spread layer of black mud was left behind. Farmers would immediately plant their crops -- never needing fertilizers because the flood soil was so rich.This narrow strip along the Nile, together with the delta at the river's northern mouth, is the only farm land Egypt has. Though it totals only three percent of the county's land, it has provided ample food for thousands of years. But recently, a population boom has forced Egyptians to increase their agricultural output. In 1970, they completed the Aswan High Dam, which stretches across the Nile 600 miles south of Cairo. The dam has effectively stopped the river's annual floods by trapping its waters in a reservoir that is slowly released during the dry season.Now farmers along the Nile plant crops year round. In fact, the area has become one of the most intensely cultivated pieces of land in the world. Because the Aswan Dam traps 98% of the river's rich sediments and prevents them from flowing downstream, farmers along the Nile must now use large amounts of artificial fertilizer. Another negative side-effect of the dam is that the Nile delta is no longer being built up by the river sediments. As a result, this important agricultural area is now struggling with erosion and dangerously high levels of soil salinity. Quote from http://www.pbs.org/wgbh/nova/flood/deluge.html

So- I guess this wee dredger is just collecting the debris to make this vast river look prettier? Don't you love how excited the man at the front of the boat looks with his job? OK- shouldn't make fun- must be hard being out all day in the sun especially through Ramadan....

And what has all of this got to do with bellydancing??? hmm- well, nubian dance is inspired by the rocking of a felucca on the water, many moves are inspired by fluidity (eg the Maya!) and since the Nile has had central important throughout Egyptian history as a life source- what better expression of that life than dance?!!!
Posted by Lorna (aka BellyLorna!) at 7:28 pm

What an interesting story about the Nile and Aswan dam! Just shows again - too many people everywhere!!!